Deck: Legacy of the Divine Tarot 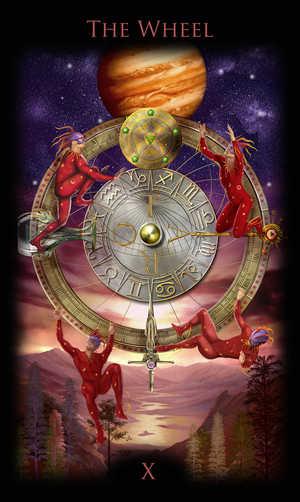 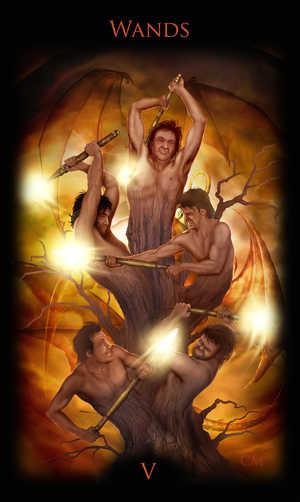 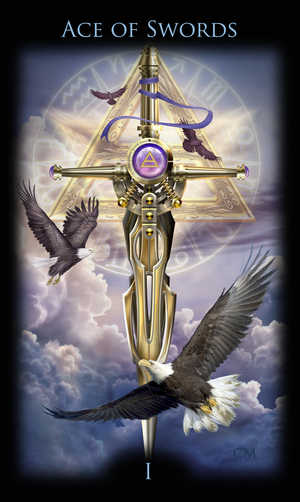 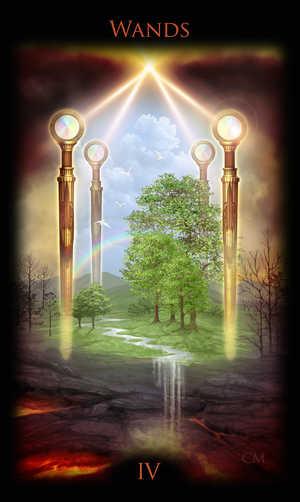 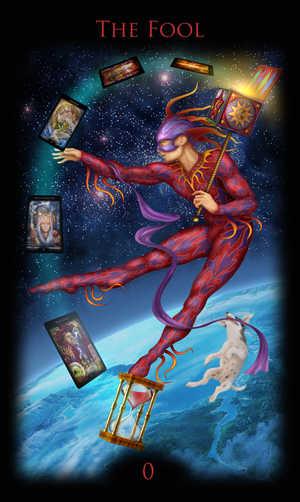 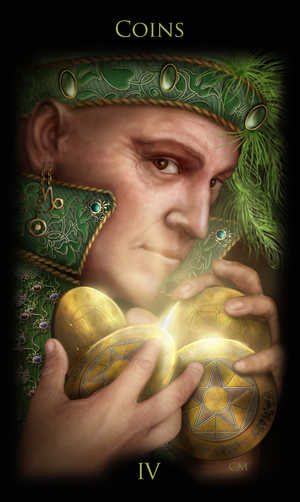 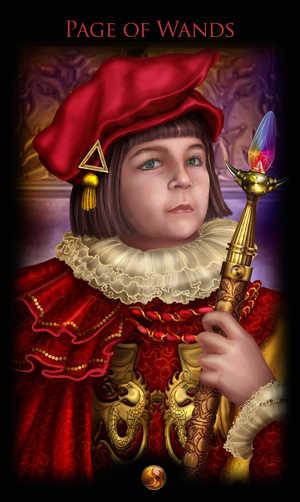 Outcome
You can view your saved spread file on this page

The Fool has returned now from his seclusive journey. He has pondered long and hard and is now ready to face and rejoin the world. He is tired but spiritually refreshed and looking forward to face the future. And the future looks promising. He enjoys some early luck as he climbs onto the Wheel. But the Wheel is a circle—literally, what goes up can and probably will come down. What goes around may come around.

As in my previous decks, I have depicted the Wheel as a physical structure. In this way I suggest that the Wheel isn’t just some metaphysical concept of fate in which we are mere pawns, but one that is in part also man-made. The variations in our personal journeys may often be perceived as good and bad luck, and luck may certainly play its part, but in making the right choices we might have some influence in the outcome and a degree of control over our destiny.
Close

Five branches of a common source—a family, a corporation, a religion. Any number of analogies comes to mind, and with any of them there is the potential for, indeed the likelihood of, conflict and disagreement. We must evaluate and make choices. Often that will require us to stand up and defend our views and values. These conflicts oblige us to reevaluate and, if necessary, change our strategy and adapt to changing circumstances.

Conceptually I find this card a challenge, both to convey the message and in terms of visual composition. But during the production of this deck, I received a wand as a gift. It was accompanied by a leaflet explaining what wood it had been made from, and it indicated that the tree had given permission for its wood to be used in the making. I found that delightful and thought it added a twist beyond the obvious in acknowledging a tree as a living entity. That reconfirmation lent itself to seeing the tree and its branches as a metaphor for this card.

A battle or struggle
Teaming up against a common foe
Cooperative creative work
People who are isolated from each other yet work toward common or opposing goals. An initial idea or plan is tested against the competing goals of those upon whom you must depend to help bring the vision to reality.
Close

Two birds of prey circle the flagship sword of this suit as it soars up majestically through the clouds. A glorious light emanates from its interlocking metal forms, illuminating the sky in a radiant glow of triumph and victory.

A new idea or inspiration
An ‘aha!’ moment which brings tremendous opportunities
You are becoming conscious of the mental and intellectual potentials available to you, both in your own mind and in the world around you.
Close

The symbolic ship has indeed come in, along with its rewards. They offer the hope and means to lay foundations, a positive base for the future. Amidst the desolation, the four wands rise into the sky. Their crystal heads emit beams of light, which join together to form a canopy. A shelter is formed; within the safety of its boundary, we can see a vision of promised growth and well-being for the future.

Safety, security
Taking concrete action in order to create the changes you desire. Desires or motivations coalesce into specific actions or objects.

Below the surface of its watery realm, a glass chalice supported by an intricate metal base rests gracefully on a marine floor. Its form, organic in design, compliments its environment. Two colored koi gracefully circle the core symbol of this suit, as light from above filters down to illuminate a promise of joy and well-being.

A new emotion or relationship surfaces
The potentials?and opportunities that such emotions can bring us.
A gift of goodwill in the middle of a conflict
You are becoming conscious of the emotional and intuitional potentials available to you, both in your own psyche and in the world around you.
Close

So here we have the Fool as the 0 card that preempts the major arcana. Our hero leaps and balances deftly on the hourglass. The colored sand reconfirms that we are at the beginning. From his decorated travel box fly glimpses of the future, characters he will meet and events that his future holds. He reaches out enthusiastically to embrace them, the world literally at his feet. He is eager and innocent, and he is unaware and therefore without fear of the precariousness of his position and the potential dangers it might also represent. His faithful companion, not quite as enthusiastic or confident of their safety, nevertheless holds on for the ride. So let the journey begin.

I have always been fascinated by the character of the “Fool,” and had included him in different guises in many previous works. So it was intriguing when I first discovered his role as lead protagonist in a tarot deck. This enigmatic figure from history is at first impression a simpleton and a figure of ridicule for the amusement of the royal court.

However, there are many references to there being far more to the character. Indeed, the court jester is often credited with having had the ear of the king and being privileged to speak truths that others would not dare. Furthermore, this intimacy and access to the king would have resulted on many occasions in the Fool’s role extending beyond that of providing simple amusement or entertainment—a role where his opinion might in fact be sought and which in turn might sway or influence. As such, this would represent a role to be envied or feared by others in the political environment or court.

I have used the Fool’s character along with the hourglass on various cards throughout the major arcana. The hourglass, with its changes in position and content of red sand, serves as a metaphor for the progress and passing of time along that journey.
Close

We’ve been challenged, we fought back and were victorious, and later we defended. Now, finally, we’re free to move ahead, get things moving, and implement some of our ideas. Now the sky literally is the limit, as we fly forward proactively at our own choice of speed and direction.

Great energy and speed
Efficient and productive mental processes
Inspiration
A great up-rush of energy
For the moment the thought-obscuring clouds have parted and you are able to think and plan with remarkable clarity and speed.

The figure is well dressed, his costume and jeweled adornments suggest a material wealth and success achieved via his efforts. But there is irony in this, for now he also has something to lose. So the possession goes hand in hand with the fear of losing it. The comfort that should be derived from those possessions cannot be fully enjoyed with this mindset. Constantly questioning whether he has enough, he holds on ever tighter. Not prepared to share or convert these possessions in ways that could be enjoyed by him or with family and friends, he instead simply hoards.

This is an interesting concept, and one that has to be considered from different perspectives. In troubled financial times, there is something to be said from a more prudent approach to one’s possessions. A balance between excess and frugality is called for. Saving some amount for a rainy day might also be an interpretation of the pose and intentions of the figure depicted in this card.

Good fortune
Alternatively, a high price paid for good fortune. Fears that what one has will be stolen. Miserliness or greed
The rich man has created his own reality and environment. And his reality has taken on a life of it’s own and is in its turn creating him.
Close

No challenge is too great for the champion of the royal court of Wands. Brash to the point of recklessness, his loyalty to liege and cause is without question. In their conflict and actions, the battling dragons cause a fiery mayhem to their surroundings. There is a nobel good behind his actions and motivations, but often the Knight of Wands lacks the control of his own actions. But his character is contagious, where he leads others will be motivated to follow.

Approach
Knights are Doing
The Knight of Wands suggests that you put your plans into action so that they take on a greater reality than simply as daydreams. For as long as he follows any particular cause, he believes in that cause with his heart and soul, it grips his entire being, and he is in fact prepared to die for it – until he loses interest and finds a new cause.

Astrology
Two-thirds Leo, one-third Cancer
The Knight loves his flamboyant role (Leo), and he will go to any means to protect that to which he owes allegiance (Cancer).
Close

Dressed in the deep crimson emblazoned with golden dragons. Despite his youth, this young prince already shows early signs of passion and regal expression as he proudly raises the emblematic glowing staff of the royal court of wands.
His enthusiasm and individuality hints at the strength of character to come. Charismatic and passionate his determination will translate into action and command attention in the years to come

Approach
Pages are Learning
The Page of Wands suggests that you learn as much as you can about your project or endeavor before diving into it head first. The Page examines her environment and sees what is lacking, then starts hatching plans to create her own reality.